The restaurant features an extensive presentation of culturally inspired and traditional Japanese cuisine. Numerous favorites are prepared on the fifteen Teppan-Yaki grills. The private tatami rooms offer traditional selections that are also served in the dining area. The award winning sushi bar prepares fresh catches in sashimi, rolls or as selected.

The ambience reminds one that they’ve come to a culture that invites warmth and practicality. Earth tones and soft lights surround and make the dining experience unforgettable. Harmonious environmental elements combine with various types and styles of wood, glass and metal to embrace the benefits of feng shui.

Teppan-Yaki table configuration can accommodate 22 adults. Tatami rooms are by strict reservation and can host groups from 1 to 22. Regular Dining tables are traditionally western in nature and can accommodate group sizes as large as 24 or as intimate as one. The sushi bar has 18 settings. The total capacity for regular dining is 60 and 150 for teppan-yaki. 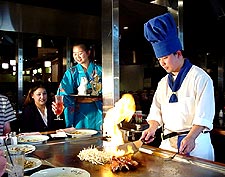 Here is a brief narrative on interesting points about Edo-Ya Tokyo Cuisine. This information also will outline Japanese cuisine in the United States and specifically in California. The roots of Edo-Ya in its locale on the northwest corner of Shaw and Marks go farther back than its opening in August of 1998.

Edo, as most historians recognize is the former name of Japan’s largest city and capitol – Tokyo. It is most well known for its important role in the Tokugawa period of Japanese history, from 1603 to 1867. The city of Edo/Tokyo was first settled during the 1100’s and grew in size until Tokugawa Ieyazu made this town his home and the administrative capital of his world. Japan’s emperor reigned in secluded majesty at the imperial capital in Kyoto; however, the true center of power, government, the economy and social life was Edo, where the Shogun lived and ruled the country. For most people in Japan today, Edo is still more than just a historical city. It also remains a symbolic image and meaning. It represents nearly everything that the Japanese consider a part of their “traditional” culture 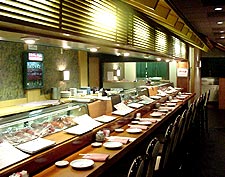 By the 1700s, there were around 1.2 million Japanese living in this burgeoning metropolis. This made Edo the largest city in the world, doubling its western counterparts Paris and London. The size of this city was assisted by the Tokugawas’ system of requiring all underlings to spend a portion of each year in the city. The presence of all of these nobles fueled the artisans, craftsmen, and other townsfolk, and built up many of the arts.

Reports from outsiders at this time marvel at the cleanliness and orderliness of the city. The city was broken up into distinct trade districts – cobbler sections, tailor sections, and so on. There were then as today fish sections kept completely separate from the fruit and vegetable areas. 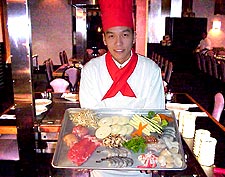 Prior to the 1800’s Japan was determined to be an isolationist culture. Western books, trade and influence were almost non-existent. Trade with other countries during the mid-1800’s was considerably restricted. In 1853, and 1854 U.S. Commodore Matthew C. Perry was successful in getting the government to open ports to accommodate international trade. This trade was limited until events took place in 1868 that caused the Tokugawa government to fail and trade to thrive.

In 1869 the Emperor Meiji decided to move to Edo, and in 1889 the new Imperial Palace was constructed. It was then that Edo was renamed to Tokyo, or “Eastern Capital”. The days of feudalism were over and the new centralized government was left in the hands of those in favor of westernization and commerce. 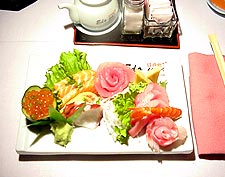 Even in modern times, Tokyo represents a city of grandeur to the Japanese. When its citizens look at this city, they see not only the modern metropolis but also the visions of what this city once was to the nation. And although modern Tokyo may look very “Western” on the surface, in its very core the spirit of Edo still lives on. It is a symbol of culture and cuisine that is embraced in all aspects at Edo-ya Tokyo Cuisine in Fresno, California.

The restaurant features an extensive presentation of culturally inspired and traditional Japanese cuisine. Numerous favorites are prepared on the fifteen Teppan-Yaki grills. The private tatami rooms offer traditional selections that are also served in the dining area.

Located at the Northwest corner of Shaw and Marks in the Target shopping center.

Review Us on Yelp!

Are you a fan of Edo-Ya? We would love to have your review on Yelp! Share your experience with our restaurant by clicking the link below: